A New Samurai Princess Is Born!

Time to head to Japan to kick some serious samurai butt – with a real female Ninja Warrior – who has terrific sword skills, right? look Ma, no hands!!

Talk About Your “Ninja Warrior”!

If you have ready ANY of my “j-sploitation” articles, you know that I love this new genre of film – and I will provide links at the end of the story – because this is really a “you must see it to believe it” kind of movie making!

First, check out the trailer!

“Samurai Princess” (サムライプリンセス 外道姫) is a Japanese film directed by Kengo Kaji, and is described as a “ero guro” action film. More on that in a second….

The film has a well-known list of “J-Sploitation” favorites involved: Special effects were produced by Yoshihiro Nishimura, who previously directed and created effects and makeup for “Tokyo Gore Police”, which “Samurai Princess” Director Kengo Kaji wrote.

Here’s the plot: A group of young schoolgirls walking through the woods is attacked by a gang of thugs. Only one of the girls survives, but is badly injured. As is usually the case in japanese exploitation, this leads to rehabilitation – then REVENGE!

Mad Science To The Rescue!

Of course, our lone survivor is found by a scientist who takes her back to his lab, and gives her a new robotic body – this is also a trend in “j-sploitation – the combination of revenge and technology! To top it off, a female monk also gives her magical powers!

The Scientist and Monk send her out to take revenge on her attackers, but as it turns out The Scientist has an ulterior motive for his actions…cue the monster!

Now, time to explain what the Director meant by calling the film a “Ero Guro”.

“Ero guro nansensu” was a literary and artistic movement originating circa 1930 in Japan.

While ero guro is a specific movement, many of its components can be found throughout Japanese history and culture. So apparently, the Director wants those elements to come across in his film!

“Samurai Princess” is just the latest example of a crazy new film trend in Japan!

If you are unfamiliar with the category, “J-Sploitation” is Japan’s version of the exploitation film – low budget, full of outrageous action and vivid special effects, and filled with lots and lots of blood.

I’ve written a number of stories about films in this genre – if you’ve missed them, jump into the pool by clicking HERE:

These films have been around for decades – and they are full of sex and violence – but remember, movies have been since the beginning of time! And this modern japanese take on violence and revenge is a unique style that really should be seen to be believed! 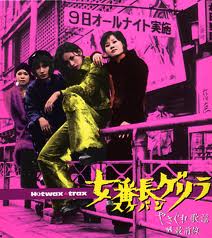 There are many great examples of this type of film: among the most notable are “Tokyo Gore Police” and “The Machine Girl”…action and exploitation in equal measure…with the added take of modern technology driving the revenge – and yes, there is lots and lots of revenge!

Check out more of these classics by clicking HERE: