REMAKING “Escape From New York”! Snake Plissken Is BACK!

Great news to share! One of cinema’s most iconic characters is coming back! 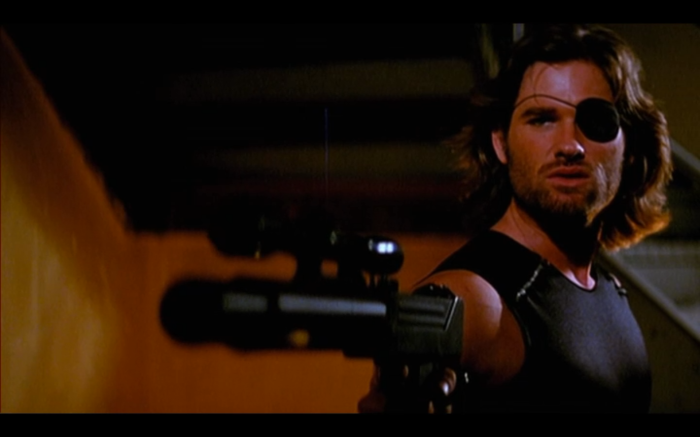 And he is, of course, “Snake Plissken!” And it has just been announced that one of cinema’s COOLEST characters is coming back! 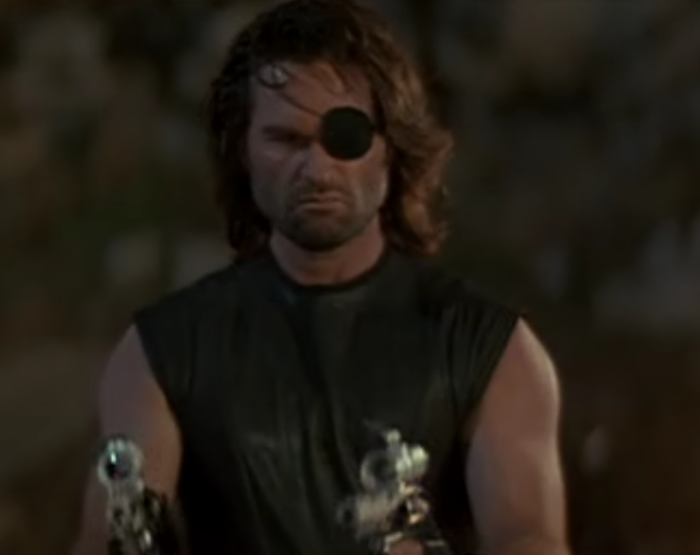 Here’s what Deadline.com is reporting:

“Snake Plissken is back! Fox has emerged from competitive bidding and closed a deal to remake the 1981 John Carptenter-directed cult classic Escape From New York. Andrew Rona and Alex Heineman’s The Picture Company will produce.” I cannot wait to see who takes over this role, because it’s impossible to imagine anyone doing it better than this guy!

Time For The Comic Genius And “Snake Plisskin” Coolness Of Kurt Russell!

Yes, he’s been acting his entire life, but in the 80’s, Kurt Russell made two films that, for me, cemented his reputation as one of the most entertaining Actors around… 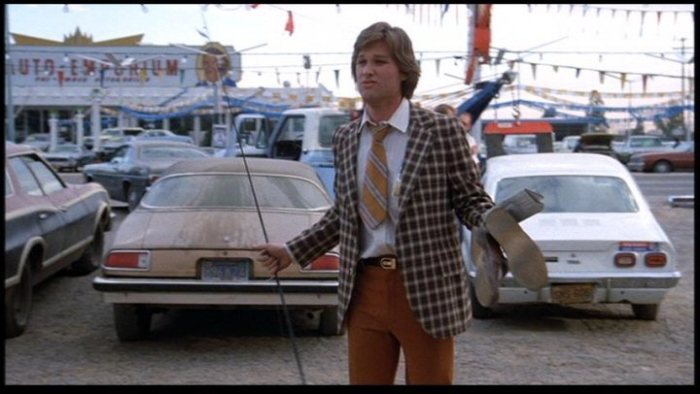 In “Used Cars”, he showcased his terrific comic timing as he played off some of the most respected character Actors in film, and in the other, he was – well, “SNAKE PLISSKIN”!

Let’s take a look at two of the greatest films of the 80’s! 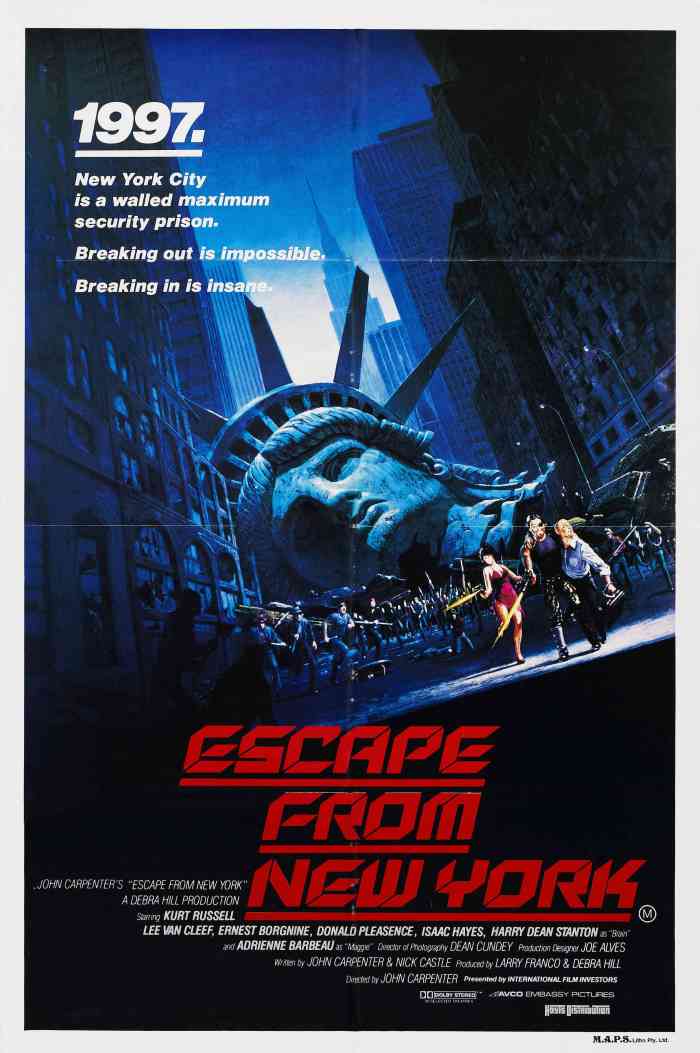 Kurt Russell exudes coolness, attitude and kick assert right off the top, when he is informed of a plane crash…

Bob Hauk: “There was an accident. About an hour ago, a small jet went down inside New York City. The President was on board.”
Snake Plissken: “The president of what?”

The setup is simple but effective: in the future – 1979!- Manahatten is turned into a penal colony, where only the worst criminals struggle to survive …so of course, the President’s plane is hijacked and he is taken hostage. What does the government do? Naturally, they send in Sanke Plisskin. 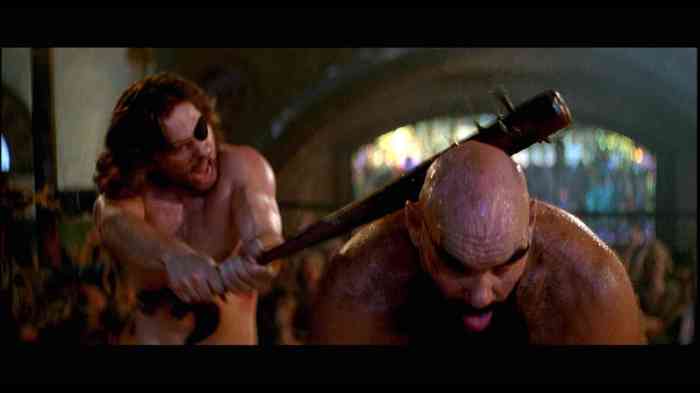 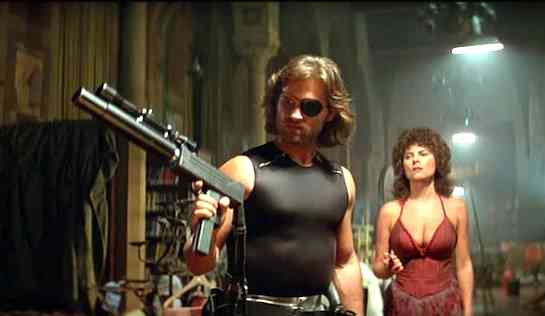 It’s his cockiness and attitude that make him a perfect “anti-hero”: of course he has no interest in helping rescue the President, he’s being blackmailed into it.

There is a shot in the film where a helicopter flies over Central Park – that was actually filmed in San Fernando, California. The buildings in the background were matte-paintings by future director James Cameron!

This is a great action thriller, and Russell is great – it was his idea to give Snake Plisskin an eye patch!

In his next film, Russell starred in one of the funniest, and most criminally neglected films of all time!

When the owner of a struggling used car lot is killed, it’s up to the lot’s hot-shot salesman to save the property from falling into the hands of the owner’s ruthless brother and used-car rival.

Meet Rudy Russo, the sleaziest used car salesman there is – well, except for all the others. Rudy wants to be a State Senator, and he’ll bribe anyone he needs to in order to achieve his dream of higher office. This hilariously profane comedy was directed by Robert Zemeckis, who went on to make “Back To The Future”. 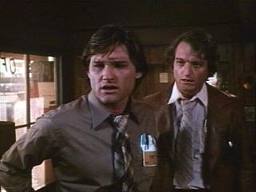 Along with his partner in crime Gerrit Graham, Russell dreams up a plot to screw his arch enemy Roy Fuchs, played with a deliciousness by veteran character actor Jack Warden.

As Roy Fuchs spits out when he disagrees with the local elected officials:

Here is some great trivia, courtesy of IMDB: In a scene where Roy Fuchs (Jack Warden) walks up to Rudy (Kurt Russell) and Jeff (Gerrit Graham) – Graham didn’t have any lines and kept pestering Director Robert Zemeckis for something to say. Finally, he just decides to repeat whatever Russell said to Warden. Apparently Warden was unaware of what Graham was doing, thus his line:

It was Warden’s genuine annoyance at Graham, which worked so well in the scene that it was included in the final cut. 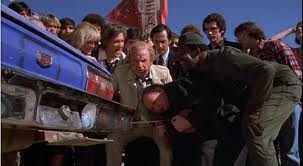 Michael McKean and David Lander (Lenny and Squiggy) have small roles as techno-geeks who jam President Carter’s State of the Union address in order to plug in an ad for the used car lot…by cutting in live from Roy Fuchs’ used car lot across the street, making use of his cars for their “live pyrotechnics”…

[President Carter on TV]
President Carter: -high inflation. What is the solution?
[TV cuts to commercial for Luke’s yard taking place in Roy’s yard]
Jeff: You want the solution to inflation? Hi, friends. Marshall Lucky here for New Deal Used Cars, where we’re lowering inflation not only by fighting high prices, not only by murdering high prices, but by blowing the living shit out of high prices. Yessir. Here’s an example. It’s a 1972 Cadillac Coupe DeVille, for sixty-two ninety-nine. That price is too high.
[shoots car] 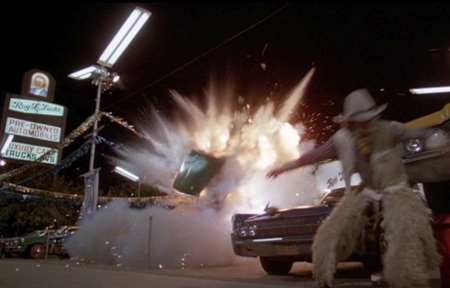 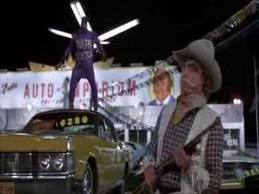 The movie is profane and hilarious, and Russell plays the slimy used car salesman perfectly… 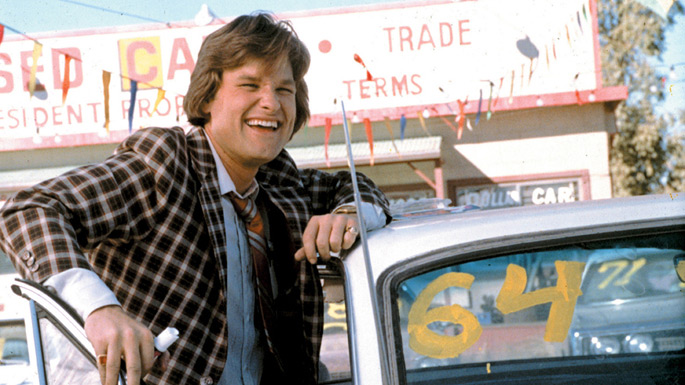 And the film also has a hilarious car chase with a ton of great action scenes….like this one: 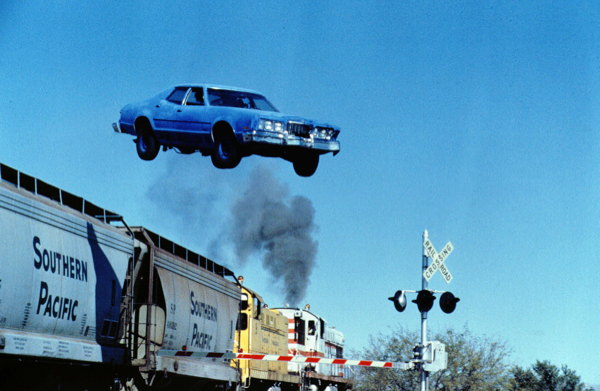 So I plan to enjoy this Kurt Russell double bill as a way to kick off a new year on a great cinematic note!