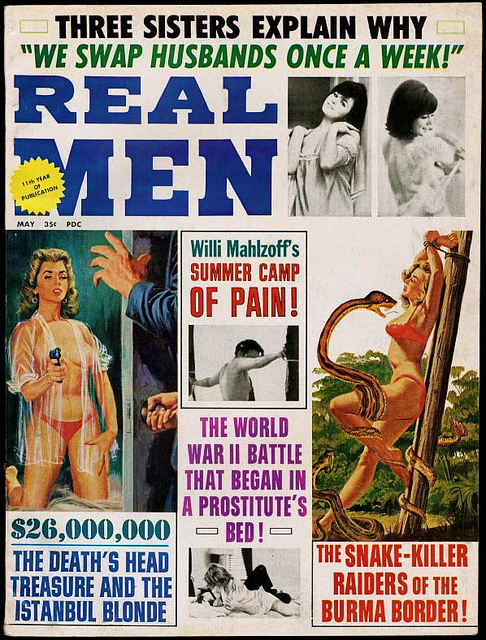 “We Swap Husbands Once A Week!”

Wow, talk about a close family! That is a headline designed to get your attention, isn’t it?

How about these two? 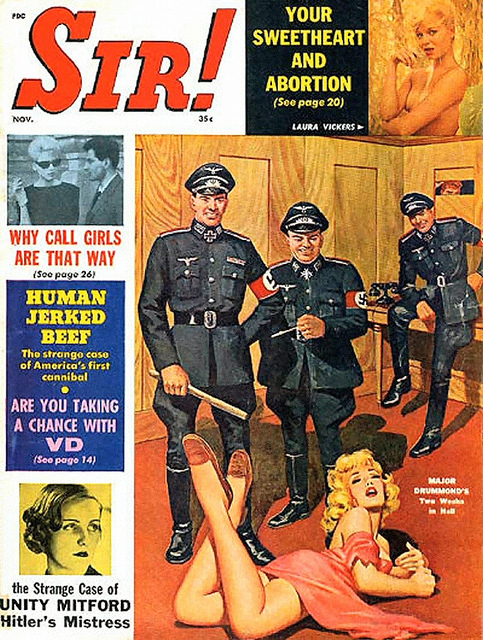 ARE YOU TAKING A CHANCE WITH VD? Do you need to know “Why Call Girls Are That Way?”

Of course you do! 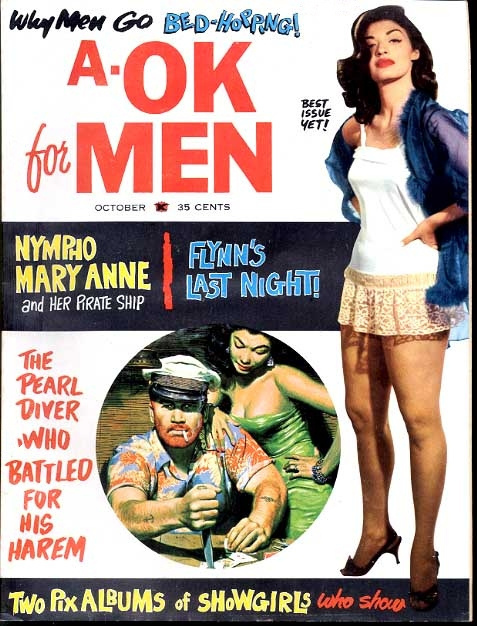 That is certainly something I want to know, and these hilariously “of their time” “lad mags” offered a look at a forbidden world of wanton women, illicit romance, and a LOT of naughty fun! 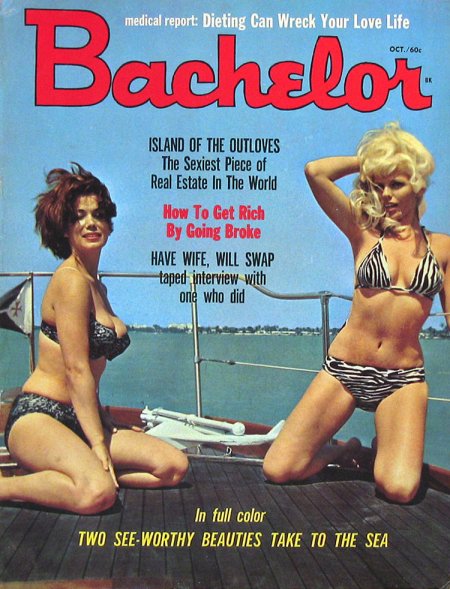 Bachelor – “Have Wife, Will Swap!”

This magazine doesn’t fool around – but every girl in this issue does!

The other great story here is titled “Medical Report: Dieting Can Wreck Your Love Life!” Of course it can! I’m sure Bachelor appealed to unmarried guys – but seems to be for the married man who wishes he had a night off! 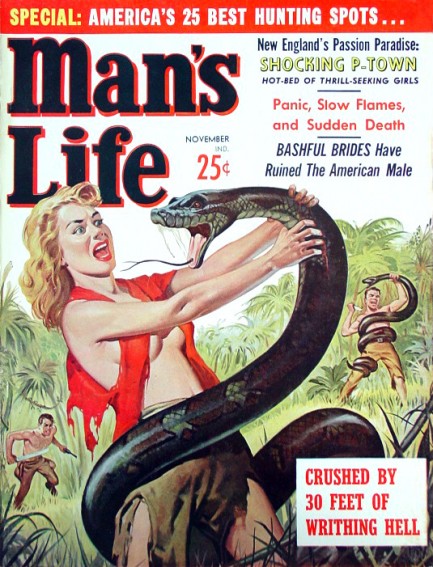 I love this one, as the cover highlights “crushed by 30 feet of writhing hell!” What she was doing in the jungle isn’t explained on the front page – which i exactly why you buy it to find out!

There is a whole genre that highlighted tough “swamp” action – lots of knife fights with exotic jungle creatures…probably helped a man feel like a man, even if vicariously… 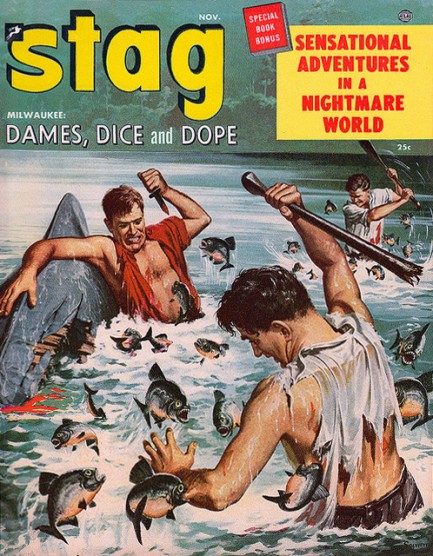 Again, exotic battles to the death – it appears that these adventurers are having to do hand-to-gill battle with piranhas – because that’s what REAL MEN DO! 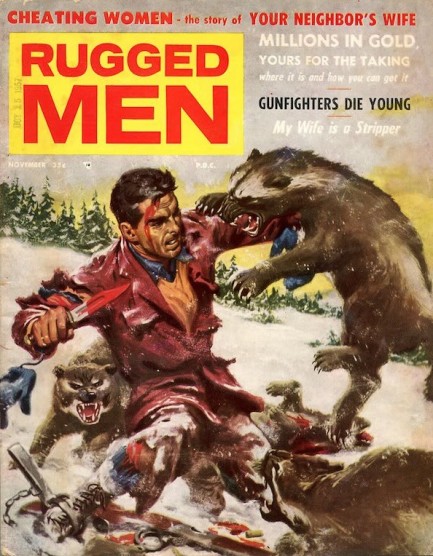 Rugged Men – “Cheating Women – The Story Of Your Neighbor’s Wife!”

In this case, you can find out about your neighbor’s cheating wife – as long as you aren’t eaten by a badger. Talk about flights of fancy – in both cases! 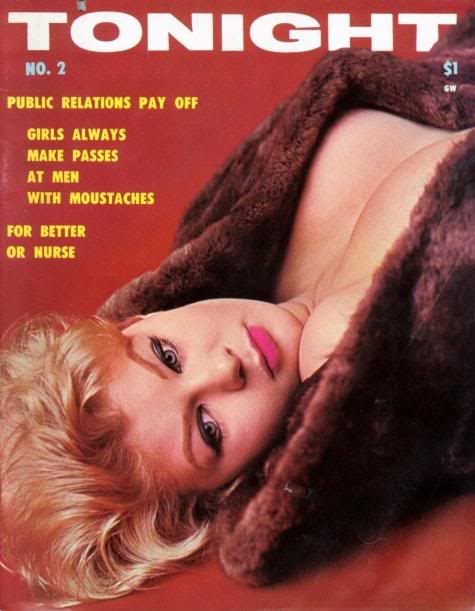 Tonight – “For Better Or Nurse!”

How can you not love any magazine that tells men with mustaches that they drive a woman wild! This also was clearly an era when “nurses” were single women with a more “relaxed” morale compass…or so the fantasy went… 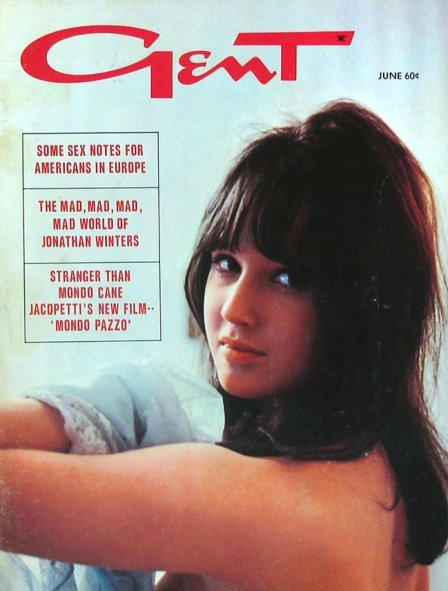 Gent – “Some Sex Notes For Americans In Europe!”

I found a website that features a litany of Gent covers, all focused on a sophisticated man – clearly a Playboy competitor, pushing exotic adventures and the promise of a more “liberated” mindset overseas…

A-OK For Men – “Nympho Mary Anne And Her Pirate Ship!”

I leave you with this one – which looks to be, shall we say, less discriminating…stories on men who bed hop, a pearl diver’s harem, and showgirl pics! And I’m sure “Mary Anne” really existed, and OF COURSE she was a Nympho – why else feature her in an upscale magazine like this one?

And of course, the classic come on: “Best Issue Yet!”

As men’s magazines became more explicit, these brands gave away to more straightforward ones like this: Yes, men’s magazines lost any sense of caution and went with full color photo spreads of stars like Linda Blair, who made heads spin with her graphic nude photo shoot: You can look at my story to see much more by clicking on the link here:

If you like these stories, and don’t want to miss any of my “2020 Sex Kitten Countdown” as well, then go to my website’s front page and sign on to follow me – there are NO ads at all, just lots of stories to come about the wild world of exploitation and cult films!

Leave me a comment and let me know if you’ve seen any of these classic men’s magazines! 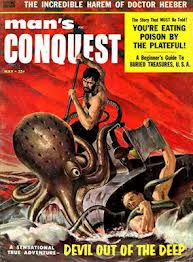